skip to main | skip to sidebar

I've tossed and turned changing foods on Elvis, and started looking into some higher fiber foods.

I also spoke with Tim over at the shelter and Melody at the clinic.

Elvis is currently on Purina ONE Sensitive Systems because I like the protein source and he does really well on it. I've been taking two cups of kibble, mixing it with two cups of hot water and then blending it until it was relatively smooth. He would get 1/3 cup in the morning and 2 tablespoons at night. With each feeding, he also had 1/2 tsp canned pumpkin.

Having looked at different foods, I was mulling a switch to either Wellness Senior or Avoderm. My only issue with the Wellness was it included some ingredients I'm just not too fond of (cranberries, etc) and Avoderm's smallest bag was 4.4 lbs, and I really wanted a 6-7 pound bag.

Both had fiber content between 5-6%, so I liked that (ONE is 3%, but I do supplement with pumpkin).

Tim and I talked over some food ideas (he came from Petsmart and has some decent knowledge of pet foods), and I also talked to Melody (she said Dr. Walthall would recommend Hill's ID...I loathe Hill's/Science Diet, so I was pretty sure unless something changed here with the food that I couldn't work around, I wasn't going to go that direction). I got some good input from both of them.

Elvis' main problem isn't constipation. It's soft stools. They're not loose, but they reflect the fact his food is ground up. And that does make him strain because I suspect he never feels like he's "done." So I've decided that's my first change.

Last night and this morning he's gotten his food whole, but soaked in water for a few minutes. Lack of teeth always concerned me, but since he eats in his crate and can take his time with no competition, he does OK.

So this is where I will start. I'll keep him on ONE, but it will be kibble, not ground. And rather than 1/2 tsp pumpkin twice a day, I'll give it once a day.

I'll try this for a few days and see what happens. I may still end up switching him to a different food, but I do want to try the whole kibble first since I know the form can make a difference.

I'll post an update on how he's doing towards the end of the week. It appears he has a second hernia showing up on the OTHER side of the base of his tail, but if we can keep what's there the same and no worse, I think he'll be fine.

We took Elvis in to see Dr. Walthall this morning, and she's on vacation, so we saw her relief vet.

Elvis has a perineal hernia which isn't particularly uncommon in un-neutered  dogs his size with docked or no tails. Unfortunately, the solution is surgery, and neither Randall nor I think he would survive it even if the shelter would give us the go ahead (and that's doubtful considering their funding issues right now).

I was hoping it would be something that wouldn't require surgery, but it does. :(

I told Melody I'd call Dr. Walthall later in the week and we could put our heads together. I suspect this is only going to be palliative care, and there's no telling how long that will be enough.

But, as Randall reminded me, Elvis' care has never been anything BUT palliative.

Calling the clinic on Monday

Elvis has developed a lump by the base of his tale that I'd like Dr. Walthall to look at. It's only been there since maybe Friday, and it's getting visibly larger.

It's not bothering him, and it may be nothing serious, but I'd like her to see it. I'll give Melody a call in the morning and set up an appointment.

I was just thinking yesterday that it had been a long, long time since I updated Elvis' blog, and here a situation presents itself.

Elvis is doing well, which is why there's not been anything posted. He's still doing well today, but we had a bit of a crisis in the house. The dishwasher flooded the house...as in it ran overnight and flooded every room but the bedrooms. So, needless to say, all the dogs stayed crated most of the morning except for a couple of potty breaks.

Because of the mess, I had to give Elvis a half a Valium so he wouldn't panic too badly. That settled him down, and by late morning, we were able to have everything back in place and the kids out.

Randall called me into the den to see Elvis. He had nabbed a chew flip and was working at it under Randall's desk. That always surprises me since the little fella only has three teeth, but there he was, gnawing away at if for all he was worth.

A bit later, when everyone was outside but him, I looked down at the comforter I keep in here by my desk for Haley, and Elvis was doing his damnedest to chew on this big old bone that belongs to Haley. Talk about a hoot. He worked and worked and worked at it. I was even able to get some photos since he was so distracted, though you can see one where he's looking up at me not too sure about my motives. :)

All I can say is his teeth cleaning back in November must have made a huge difference for him because I've caught him working on bones and chew flips several time since then. 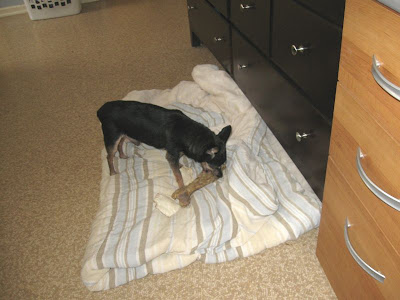 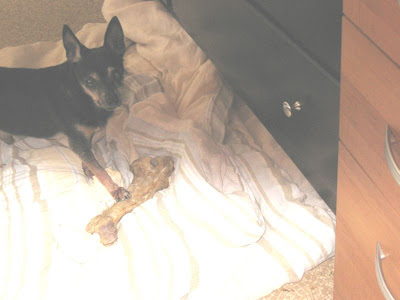 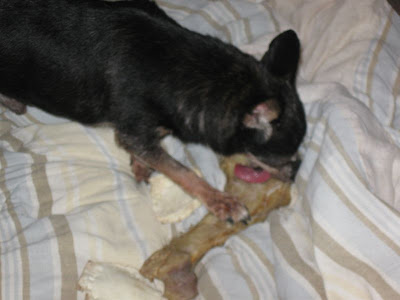 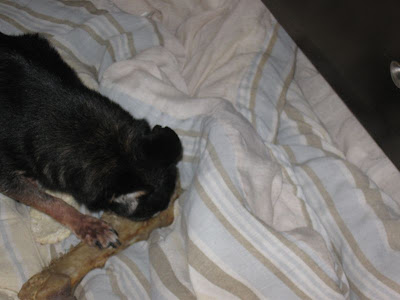 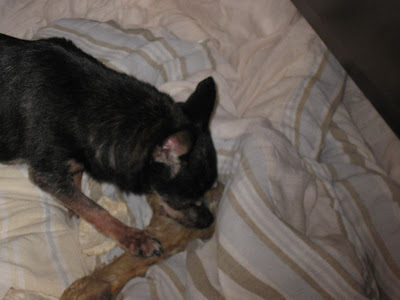 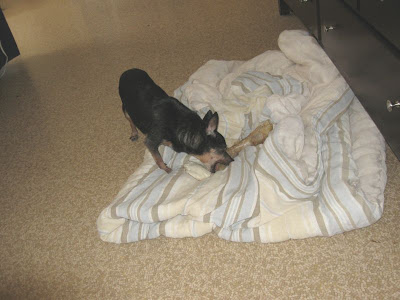 "Our job is to make sure no one is left behind in the wreckage."

The Search Dog Foundation scours animal shelters for some of the worst-behaving dogs you can imagine. And after rigorous training, they enter the ranks of the most elite search and rescue dogs in the world - dogs that have been deployed at 9/11's ground zero and the earthquake aftermath in Haiti to find survivors that machines can't.

Randall heard a funny noise coming out from underneath his desk, and when he looked, he discovered Elvis chewing on one of the bones our other foster dog gnaws on. Quite and event when you remember that a) he only has three teeth and b) he had to carry it under there.

He can be a very determined little fella.

(I had to lighten one of these a whole lot since it was dark under the desk and the flash could only do so much there.) 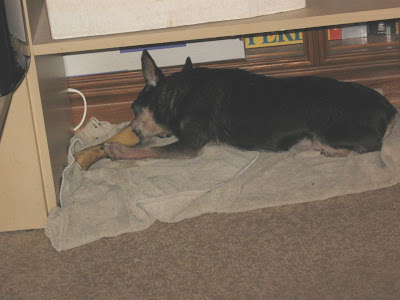 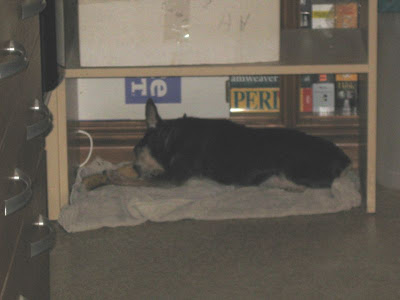 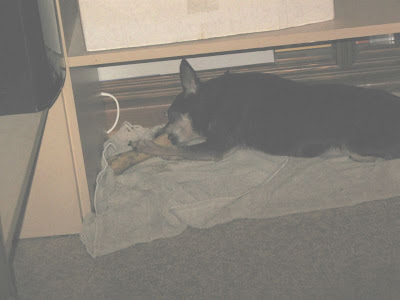 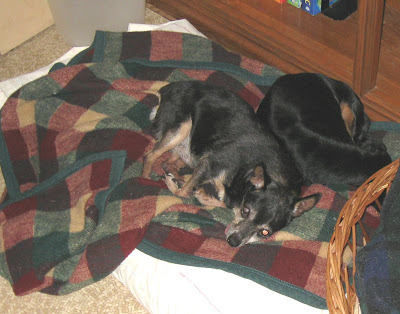 Older Posts Home
Subscribe to: Posts (Atom)
This is a blog about Elvis, a senior dog we are fostering for the Central Texas Humane Society. 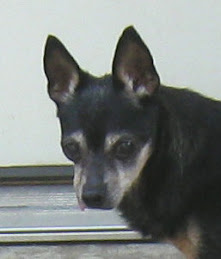 Adopt A Senior from the Central Texas Humane Society